Coworking in Africa: Facts and Figures

As 2016 is already warming up, and the next major Coworking meetups are already are on the horizon, we look back to how far we have come so far in 2016. Presented at the last Coworking African meetup 2016, in Cape Town, Vanessa Sans of Social Workplaces gave a keynote exploring the coworking boom in Africa, titled: “Coworking in Africa-Facts and Figures”.

Vanessa discussed the steady growth of coworking worldwide, highlighting that the average coworking space has approximately 46% more members than it did two years ago. Today, there are about half a million people in total working out of coworking spaces. What’s even more positive, is that this increase in memberships and spaces has not led people to feel that they are in a more isolated work environment.

In Vanessa’s presentation, “Coworking in Africa-Facts and Figures”, she goes back to 2013, when the coworking scene in Africa was barely visible on the global coworking map. According to The Global Coworking Census, there were only 24 spaces at the time. Fast forward 2 years and there are now over 250 active spaces, comprised of both hubs and coworking spaces. All of this information shows us that the African movement is on the same track that Europe and the USA were 5 years ago, showing promise that coworking in Africa is not going anywhere.

Today, Egypt is leading the way with around 76 spaces, but we can guess that there may be more. Egypt is then followed by South Africa with 67 coworking spaces, in which more than half of these spaces can be found in Cape Town. In 3rd position is Morocco with 17, followed by Nigeria with 13 and Kenya with 12.

“Coworking in Africa-Facts and Figures”, not only outlines the numbers which prove growth and development but also explores the ways that coworking spaces have played a key role in Africa’s socio-economic development:

Still today there are several critical issues that Africa is working on overcoming, such as the lack of quality infrastructure and strong internet connectivity. Since 75% of the population is under the age of 30 there is now an entire whole generation of talent currently looking to get their career off the ground, thus these issues have become a priority for innovators and entrepreneurs in Africa. With a more connected and innovative economy growing rapidly in Africa, coworking has proven to be an essential tool for young entrepreneurs, allowing them access to valuable resources, skills, knowledge, and job opportunities.

In fact, thanks to mobile technologies, Africa is one of the most connected populations in the world, and coworking has provided the space and value system upon which local entrepreneurial communities can develop. Today, with more and more spaces popping up, the African coworking ecosystem is now prepared to connect to these other communities to strengthen, which also creates potential for global collaboration as well. 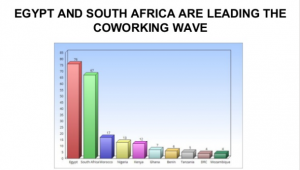 Overall Vanessa’s presentation outlines the steps the coworking movement in Africa has taken to get to where it is today, with a growing number of collaborative spaces that can now offer the proper conditions and infrastructure needed for professional growth in Africa. Today, the African coworking community sees open and collaborative spaces as the bedrock of various local ecosystems comprised of entrepreneurs who are shaping the future of modern, digital-friendly tech-savvy economies.